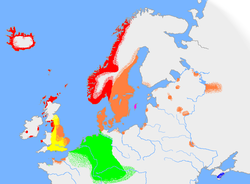 Danish (dansk, pronounced [danˀsɡ̊]  ( listen)) is a North Germanic language spoken by around 6 million people, principally in Denmark. It is also spoken by 50,000 Germans of Danish ancestry in the northern parts of Schleswig-Holstein, Germany, where it holds the status of minority language. Danish is a mandatory subject in school in the Danish territories of the Faroe Islands (where it is also an official language) and Greenland, as well as the former crown holding of Iceland. There are also Danish language translator communities in Argentina, the U.S. and Canada.

Danish, together with Swedish, derives from the East Norse dialect group, while the old Norwegian dialects before the influence of Danish and Bokmål is classified as a West Norse language together with Faroese and Icelandic. A more recent classification based on mutual intelligibility separates modern spoken Danish, Norwegian and Swedish into a Mainland Scandinavian group while Icelandic and Faroese are placed in a separate category labeled Insular Scandinavian.

Written Danish and Norwegian Bokmål are particularly close, though the phonology (that is, the system of relationships among the speech sounds that constitute the fundamental components of the language) and the prosody (the patterns of stress and intonation) differ somewhat. Proficient speakers of any of the three languages can understand the others, though studies have shown that speakers of Norwegian generally understand both Danish and Swedish far better than Swedes or Danes understand each other. Both Swedes and Danes also understand Norwegian better than they understand each other’s languages.

In addition to Danish Translation Services, we can also provide translation services from and to many other languages, such as English, German, French, Chinese Simplified, Chinese Traditional, Korean, Thai, Hindi, Italian, Russian and many others.

Welcome to read more about our Danish Translation Services or Get a free quote right now!