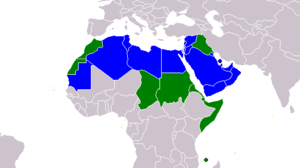 Arabic (العربية al-ʿarabiyyah, IPA: [æl ʕɑrɑˈbijjɐ], or عربي ʿarabī, [ˈʕɑrɑbiː]) is a name applied to a group of dialects of the Central Semitic languages, thus related to and classified alongside other Semitic languages such as Hebrew and the Neo-Aramaic languages. Spoken Arabic varieties have more speakers than any other language in the Semitic language family. They are spoken by more than 280 million people as a first language, most of whom live in the Middle East and North Africa.

Literary Arabic is the official language of 22 countries and it is the liturgical language of Islam since it is the language of the Qur’an, the Islamic Holy Book. Arabic has many different, geographically distributed spoken varieties, some of which are mutually unintelligible. Modern Standard Arabic (also called Literary Arabic) is widely taught in schools, universities, and used in workplaces, government and the media.

Modern Standard Arabic derives from Classical Arabic, the only surviving member of the Old North Arabian dialect group, attested in Pre-Islamic Arabic inscriptions dating back to the 4th century. Classical Arabic has also been a literary language and the liturgical language of Islam since its inception in the 7th century.

Arabic has lent many words to other languages of the Islamic world, like Turkish, Urdu and Persian. During the Middle Ages, literary Arabic was a major vehicle of culture in Europe, especially in science, mathematics and philosophy. As a result, many European languages have also borrowed many words from it.

Arabic influence is seen in Mediterranean languages, particularly Spanish, Portuguese, and Sicilian, owing to both the proximity of European and Arab civilizations and 700 years of Arab rule in some parts of the Iberian peninsula (see Al-Andalus).

Arabic has also borrowed words from many languages, including Hebrew, Greek, Persian and Syriac in early centuries, Turkish in medieval times and contemporary European languages in modern times. Arabic is written with the Arabic alphabet, which is an abjad script, and is written from right-to-left.

In addition to arabic language translation, we can also provide translation services from and to many other languages, such as English, German, French, Chinese Simplified, Chinese Traditional, Korean, Thai, Hindi, Italian, Russian and many others.

Read more about our Arabic Translation Services or Get a free quote right now!