A game is a place of imagination, where you get the chance to escape the real world and be whatever you want. Games have become so entertaining, interesting, and interactive, and they literally give you a sense of false reality, creating a whole new world of fantasy with its own rules, and languages.

You might have noticed that the languages most games use are not real; they’re sort of alien languages that do not really have any meaning. Such languages create mystery, layers, and more character in the game.

Minecraft is a famous mining game that uses non-real language in-game. Sometimes, this language does make the players confused, especially if they are beginners.

Most players are unable to comprehend the language and they keep scratching their heads. This article will help you understand more about the Minecraft language, and you will also learn how to read it.

What is Minecraft Enchanting Table Language?

Minecraft enchanting table language is a fictional language used in the Minecraft game. Minecraft is an interesting game, where players would mine and collect raw minerals. Players can also use the collected resources to make tools and castles.

Through the journey of a player in-game, they have to fight with non-player characters, or other players to go ahead in the game.

Players come across many strange symbols throughout, you would never understand the meaning of them unless you understand the language. Whenever a symbol or alien word appears, you have to Google it every time.

It seems like there is a mystery lying behind those symbols and you desperately want to know the meaning. Understanding the Minecraft enchanting table language would make it easier for the players to interact with the game and improve their gaming. For this, you must be familiar with standard galactic alphabets and know the enchanting table secret.

What Is the Standard Galactic Alphabet? 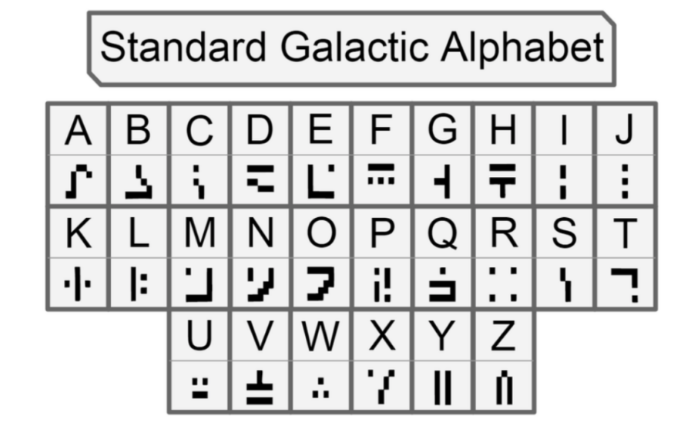 This language is made by replacing every alphabet in the English language with a symbol. Understanding the alphabet would help you decode the meaning of Minecraft language.

Is The Minecraft Enchanting Language Readable?

You can either learn the standard galactic alphabets yourself or use a translation app that provides translation for such gaming languages. Not every translating app is going to provide translation for Minecraft’s enchanting table language because it is not a real-world language. So, make sure you are using the right translation app for the purpose.

Is Learning the Minecraft Enchanting Language Necessary to Play the Game?

Not really, you can play the game very well, even if you don’t understand the language. These are just the random word phrases used in the game, but it has nothing to do with the game itself.

There are some pro gamers who become proficient in decoding the symbols without any tool, but they are just a handful of people. However, for some reasons, learning the Minecraft enchanting table language could be beneficial.

For instance, many people share secret codes and messages outside the game using the standard galactic alphabets; it will be easier for you to understand the code messages if you are familiar with the game language.

Well, it is not so hard to find the meaning of Minecraft language because there are translation apps, translators, and of course, Google to help you understand it.

Learning the language is not essential though, still, it is quite fun to learn, because it will really improve your gaming experience. Players use different methods to read the language; for instance, some would use a translator app, some use a standard galactic symbols chart, or some gamers also prefer to learn standard galactic alphabets.

However, knowing the meaning of the words and phrases is not useful in the game because it is all just random English words.

When you decode the meaning of words and phrases used in the game, you’ll get to know that they are just some random word combinations, making no sense to the game. However, it doesn’t mean this language is not useful at all.

Some gamers use the language to send secret messages to each other outside the game, in some social groups. They share deep insights about the game in the Minecraft language.

Why Some Words Don’t Mean Anything in English?

You would notice that some words used in the Minecraft enchanting game don’t mean anything in the English language. Most of the time, these are the names of fictional characters in some fictional movie or novel. The non-English words are not by mistake, they do mean something in the fictional world; however, even these words are not useful for the players. So, there is a meaning to every phrase, but it rarely has any relevance to the game scene.

Do We Have Professional Minecraft Enchanting Language Translators?

Well, you can find people who can translate the Minecraft enchanting table language for you, but they’re not professional translators. Being a fictional language, there is no need for professional translations. On social groups of Minecraft games, there are pro-gamers who are proficient in game language translation. You can ask them for help. Though the language doesn’t serve any purpose, some gamers are still very curious about decoding the phrases.

Galactic alphabet charts are available everywhere, but some gamers have done comprehensive research on the language. You will get traces of pop culture or may find deep meaning, and relevancy.

They can provide you with that secret information revealing “mysterious game secrets” for some money. It is not all professional, but some smart gamers are still making money by being part-time translators.

If you’re curious about decoded meanings and secrets from that fictional language, you can contact pro-gamers for that.

Google translator is a go-to place online for all sorts of translations to and from a wide range of languages. Unfortunately, fictional languages are not included.

You can find many websites on Google that might provide translations for such languages, but not Google Translator. Not so far, but who knows, in the future, Google would start providing translations for fictional language, considering the fast growth of the gaming industry.

Understanding the fictional language can be really fun and it also enhances your game experience. If you don’t have a translation app in place, you can still decode the meaning of symbols through a standard galactic alphabet chart that will tell you exactly which Latin alphabets these symbols represent. However, you will find no relevance between these words and the actual game.

What Language Do They Speak in Belgium TOP