How Many Languages are Spoken in Turkey? 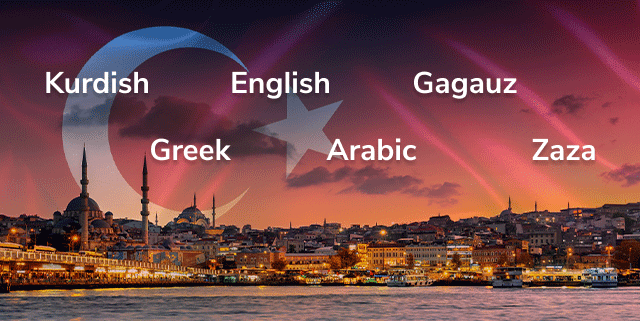 The republic of Turkey which was once the hub of the Ottoman Empire holds great importance in the global world. It has an enriched history, civilization, and culture.  The strategic location of Turkey combines both Asia and Europe. Moreover, it has a silk road through which people do trade between Europe and Asia. Turkey was colonized by many nations. Therefore, these rulers have a great impact on Turkey’s culture. Although the official language of Turkey is Turkish but unlike the other counties there are several regional languages spoken in Turkey. These languages came into existence because of the interaction between foreigners with local Turks.

Why is the Turkish Official Language of Turkey?

Every country has its official language which they use to run the operations of the country. In the constitution of Turkey under Article 42, the Turkish language is given the status of official language. Because of its official status, it is the most spoken language in Turkey. Other than the Turkish language, 30 ethnic languages are spoken in Turkey. However, a small number of people speak this language. These languages are called minority languages. Languages that are spoken in Turkey are spoken according to their region. They are given importance according to the number of speakers. Furthermore, they are categorized as foreign languages, ethnic languages, and immigrant

Although the Turkic language family contains many other languages, Turkish is a widely spoken language. It is native to 60 million native speakers that are spread all around the world. In Turkey, 99% of the Turkish population speak Turkish in the daily conservation of life. Out of this number, 93% speak Turkish as their native language and only 6% used it as a second language. Turkish is an Altaic language with unique characteristics. It contains a vowel word with melodious harmony. When these vowels are joined together, they form a beautiful word. To your surprise, there are no grammatical gender and noun classes in Turkish. It is mutually intelligible with Turkmen, Tatar, Kazakh, Uyghur, Uzbek, Kyrgyz, and Azerbaijani.

Kurmanji is also known as Northern Kurdish. It is a Kurdish dialect that is spoken in different parts of Iraq, Iran, Turkey, and Syria. Moreover, it is the ancient religious language of Yazidis. It follows a famous Latin writing system that resembles the Turkish writing system. Its oldest written scriptures are dated back to the 1500s. Approximately 80% of Kurds that are ethnic groups of the middle east speak Kurmanji.  Five main dialects in Kurmanji are Southwestern Kurmanji, Northwestern Kurmanji, Southern  Kurmanji, Northern Kurmanji, and Anatolian Kurmanji also known as Badini.  Approximately 8 million people in Turkey speak Kurmanji. Moreover, three million Turkish residents speak monolingual Kurmanji. This has created a problem in Turkey because according to their constitution no other language can be used for education or training other than the Turkish language.

Arabic is a Semitic language from the group of Afro-Asiatic languages. it is like Maltese, Hebrew, and Amharic languages. As we all know, Arabic is the most spoken language in the Middle East. However, it is also spoken in Turkey because of its proximity to Arab countries. The Arabic dialect which is spoken in South-eastern  Turkey is called Mesopotamian Arabic. This dialect is also spoken in Iran, Iraq, Cyprus, and Northern Syria.  There was a time when North Mesopotamian Arabic was spoken all over Mesopotamia but now it is only spoken in some parts of South-eastern Turkey. Approximately, 2 million Turkish citizens with Turkish ancestry speak the Arabic language whereas 1-2% of native Turkish people speak Arabic. At present, the number of people who speak Arabic in Turkey has immensely increased because 3 million Syrian refugees migrated there.

Another language spoken in Turkey is Zaza. It is an Indo-European language and is mostly spoken in Eastern Turkey by Zazas. This language is from the Zaza-Gorani group of languages which is also a part of a north-western group of the Iranian branch. The glossary of the Zaza language is considered scornful. Therefore many Zazas called it Dimili. This language is mutually intelligible with Tati, Talysh, Gilaki, Semantic language, Mazandarani, and Gorani. Moreover, the Kurdish language has also influenced this language because the interaction between Zaza and Kurdish is from centuries. Therefore, people that speak Zaza consider themself as Kurds and they identify this language as a Kurdish dialect. This language is spoken by more than 1 million people. This language has three major dialects that are influenced by people of Zaza that live in the hometown of Northern Iran and the Caspian Sea.

Do you know that Turkey is home to 61,000 Armenian speakers? But now this number is decreasing. Approximately, 50,000 people that reside in and around Istanbul speak this language. Therefore, it is called the Istanbul language in Turkey. There are many different dialects of the Armenian language that are middle Armenian, old Armenian, and modern Armenian. There are two different varieties of modern Armenian called Western Armenian and Eastern Armenian. There were 50 dialects of Armenian that were known before 1915. However, they were reduced because of the massacre of the Armenian population in Turkey by immigrants. One important thing to note is that all the dialects of this language are mutually intelligible.

Gagauz is also one of the Turkic languages. It is the Turkish language spoken by the people of Ukraine, Russia, Moldova, Turkey, and Russia. It has two dialects called Maritime  Gagauzi and Bulgar Gagauzia. The most distinct dialect is Balkan Gagauz Turkish. The origin of Gagauz is not clear. At the start of the 20th century, there were 19 different theories about the origin of this language, after some time, the theories increased to 21. Do you know in these theories, Gagauz people are depicted as the heirs of Cumans-Kipchaks and Bulgars?  According to Eastern Orthodox Christianity, their ancestors lived in the Balkans before the invasion of the Ottoman Empire in the 14th century.

Although English is a universal language to your surprise, English prevalence in Turkey is quite low. It is reported that only one-fifth of the population speaks English. According to recent reports, only 17%  of the population speaks English and this papulation English at a basic level only. Therefore, you will not find fluent English speakers in Turkey. If you are planning to go to Turkey then only in Istanbul, you will find English speakers in the tourist’s hotspots.  So it is better to get a knowhow of Turkish before planning to go to Turkey.

Languages Spoken by  Immigrants and Foreigners in Turkey

Many people from around the globe wish to migrate to Turkey because its civilization is an amalgamation of both Asian and Western cultures. German, French, and Italian are also spoken in Turkey. Moreover, they are also taught in schools. Many immigrants when communicating with local people resulted in the formation of different ethnic languages. The immigrant languages spoken in Turkey are Tatar, Adyghe, Albanian, Bosnian, Kabardian, Georgian, and Crimean.

Turkey due to its strategic location plays an important role in global logistics. If you want to expand your business in Turkey then you must know the Turkish language. This is because, despite various languages spoken in Turkey, they give importance to their official language.

Get Free Quote
Copyright © CCJK Technologies Co., Ltd. 2000-2023. All rights reserved.
How Many Kinds of Translation?

How to Become a Subtitle Translator TOP