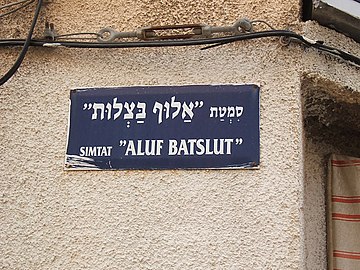 Hebrew (עִבְרִית, Ivrit,  Hebrew pronunciation (help·info)) is the language of the Jews and a Semitic language of the Afro-Asiatic language family. Culturally, it is considered the language of the Jewish people, though other Jewish languages had originated among diaspora Jews, and the Jews were only part of the whole Hebrew/Canaanian sprachraum. Hebrew in its modern form is spoken by most of the seven million people in Israel while Classical Hebrew has been used for prayer or study in Jewish communities around the world for over two thousand years. It is one of the official languages of Israel, along with Arabic.

Ancient Hebrew Translation is also the liturgical tongue of the Samaritans, while modern Hebrew or Palestinian Arabic is their vernacular, though today about 700 Samaritans remain.

As a foreign language it is studied mostly by Jews and students of Judaism and Israel, archaeologists and linguists specializing in the Middle East and its civilizations, by theologians, and in Christian seminaries.

The core of the Torah (the first five books of the Hebrew Bible), and most of the rest of the Hebrew Bible, is written in Classical Hebrew, and much of its present form is specifically the dialect of Biblical Hebrew that scholars believe flourished around the 6th century BC, around the time of the Babylonian exile. For this reason, Hebrew has been referred to by Jews as Leshon HaKodesh (לשון הקודש), “The Holy Language”, since ancient times.

The modern word “Hebrew” is derived from the word “ʕibri” (plural “ʕibrim”) one of several names for the Jewish people. It is traditionally understood to be an adjective based on the name of Abraham’s ancestor, Eber (“ʕebr” עבר in Hebrew) mentioned in Genesis 10:21.

This name is possibly based upon the root “ˁabar” (עבר) meaning “to cross over” and homiletical interpretations of the term “ʕibrim” link it to this verb. In the Bible, “Hebrew” is called Yhudit (יהודית) because Judah (Yhuda) was the surviving kingdom at the time of the quotation, late 8th century BCE (Is 36, 2 Kings 18). In Isaiah 19:18, it is also called the “Language of Canaan” (שְׂפַת כְּנַעַן).

In addition to Hebrew Translation Services, we can also provide translation services from and to many other languages, such as English, Gujarati, French, Chinese Simplified, Chinese Traditional, Korean, Thai, Hindi, Italian, Russian and many others.

Welcome to read more about our Hebrew Translation Services or Get a free quote right now!

Take a look at how we helped our client by localizing their project for Hebrew language. Click here to read the complete case study