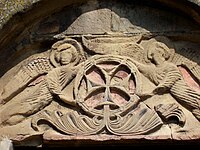 Georgian (ქართული ენა, pronounced [kʰɑrtʰuli ɛna]) is the native language of the Georgians and the official language of Georgia, a country in the Caucasus.

Georgian is the primary language of about 4 million people in Georgia itself, and of another 500,000 abroad. It is the literary language for all regional subgroups of the Georgian ethnos, including those who speak other Kartvelian (South Caucasian) languages: Svans, Mingrelians, and the Laz. Judaeo-Georgian, sometimes considered[by whom?] a separate Jewish language, is spoken by an additional 20,000 in Georgia and 65,000 elsewhere (primarily 60,000 in Israel).

Georgian shared a common ancestral language with and is believed to have separated from Svan and Mingrelian/Laz in the first millennium BC. Based on the degree of change, linguists (e.g. Klimov, T. Gamkrelidze, G. Machavariani) conjecture that the earliest split occurred in the second millennium BC or earlier, separating Svan from the other languages. Megrelian and Laz separated from Georgian roughly a thousand years later.

In addition to Georgian Translation Services, we can also provide translation services from and to many other languages, such as English, German, French, Chinese Simplified, Chinese Traditional, Korean, Thai, Hindi, Italian, Russian and many others.

Welcome to read more about our Georgian Translation Services or Get a free quote right now!