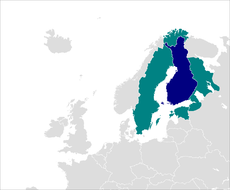 Finnish ( suomi (help·info), or suomen kieli) is the language spoken by the majority of the population in Finland (92% as of 2006) and by ethnic Finns outside Finland. It is one of the two official languages of Finland and an official minority language in Sweden. In Sweden, both standard Finnish and Meänkieli, a Finnish dialect, are spoken. The Kven language, a Finnish dialect spoken in Northern Norway, is an official minority language in Norway.[citation needed]

Finnish is the eponymous member of the Finno-Ugric language family and is typologically between fusional and agglutinative languages. It modifies and inflects the forms of nouns, adjectives, pronouns, numerals and verbs, depending on their roles in the sentence.

Finnish is one of two official languages of Finland (the other being Swedish, spoken by 5.49% of the population as of 2006) and an official language of the European Union. It enjoys the status of an official minority language in Sweden. It is also one of the working languages of the Nordic Council. Under the Nordic Language Convention, citizens of the Nordic countries speaking Finnish have the opportunity to use their native language when interacting with official bodies in other Nordic countries without being liable to any or Finnish interpretation or translation costs.

In addition to Finnish Translation Services, we can also provide translation services from and to many other languages, such as English, German, French, Chinese Simplified, Chinese Traditional, Korean, Thai, Hindi, Italian, Russian and many others.

Welcome to read more about our Finnish Translation Services or Get a free quote right now!