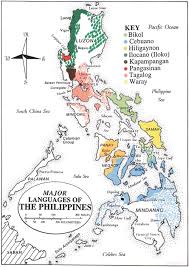 In practical terms, Filipino is the formal name of Tagalog, or even a synonym of it. It is sometimes described as “Tagalog-based”, part of a political fiction that the national language is based on an amalgam of Philippine languages rather than on Tagalog alone. It is usually called Tagalog within the Philippines and/or among Filipinos to differentiate it from other Philippine languages, but has come to be known as Filipino to differentiate it from other countries’ languages; the former implies a regional origin, the latter a national. This is similar to the Spanish vs. Castilian concept (see Names given to the Spanish language)

One famous event which illustrated the relationship between Filipino and Tagalog occurred during the impeachment trial of the former President Joseph Estrada. When the presiding justice Hilario Davide, a Cebuano, asked which language the witness Emma Lim preferred to testify in, Lim promptly answered “Tagalog”, to which Davide did not agree. According to Davide, nobody could testify in Tagalog because it is not the official language of the Philippines and there is no available interpreter from Tagalog to Filipino. However, Senator Franklin Drilon, an Ilonggo, defended the oneness of the two by saying that an interpreter will not be needed because everybody would understand the testimony in Tagalog.

In addition to Filipino Translation Services, we can also provide translation services from and to many other languages, such as English, German, French, Chinese Simplified, Chinese Traditional, Korean, Thai, Hindi, Italian, Russian and many others.

Welcome to read more about our Filipino Translation Services or Get a free quote right now!