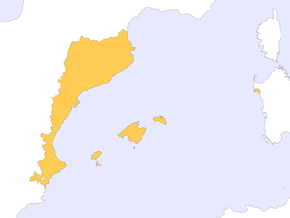 Catalan (English pronunciation: /kætəˈlæn/, /ˈkætəlæn/, /ˈkætələn/; Catalan: català [kətəˈɫa] or [kataˈla]) is a Romance language, the national and the only official language of Andorra, and a co-official language in the Spanish autonomous communities of Catalonia, the Balearic Islands and Valencian Community, where it is known as Valencian (valencià [valensiˈa]), as well as in the city of Alghero on the Italian island of Sardinia. It is also spoken, with no official recognition, in the autonomous communities of Aragon (in La Franja) and Murcia (in Carche) in Spain, and in the historic Roussillon region of southern France, roughly equivalent to the current département of the Pyrénées-Orientales (Northern Catalonia).

Although recognized as a regional language of the Région Pyrénées-Orientales  since 2007, Catalan has no official recognition in France, as French is the only official language of that country, according to the French Constitution of 1958.

In addition to catalan language translation, we can also provide translation services from and to many other languages, such as English, German, French, Chinese Simplified, Chinese Traditional, Korean, Thai, Hindi, Italian, Russian and many others.

Welcome to read more about our Catalan Translation Services or Get a free quote right now!