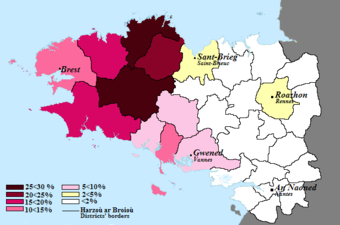 Breton (Brezhoneg) is a Celtic language spoken in Brittany (Breton: Breizh; French: Bretagne), France. Breton is a Brythonic language, descended from the Celtic British language brought from Great Britain to Armorica by migrating Britons during the Early Middle Ages. Like the other Brythonic languages, Welsh and Cornish, it is classified as an Insular Celtic language. Breton is most closely related to Cornish, as both are thought to have evolved from a Southwestern Brythonic protolanguage. The other regional language of Brittany, Gallo, is a Langue d’oïl derived from Latin.

Breton is spoken mainly in Western Brittany, but also in a more dispersed way in Eastern Brittany (where Gallo is spoken alongside Breton and French), and in areas around the world that have Breton immigrants.

The dialects of Breton as identified by Ethnologue are Leoneg, Tregerieg, Gwenedeg, and Kerneveg (in French, respectively: léonard, trégorrois, vannetais, and cornouaillais). A fifth dialect was spoken up to the beginning of the 20th century in the Guérande region. There are no clear borders between those dialect areas because the language varies slightly from one village to the next. Compared to the other dialects, the Gwenedeg dialect is somewhat more distinct due to several pronunciation specificities.

In addition to Breton Translation Services, we can also provide translation services from and to many other languages, such as English, German, French, Chinese Simplified, Chinese Traditional, Korean, Thai, Hindi, Italian, Russian and many others.

Welcome to read more about our Breton Translation Services or Get a free quote right now!