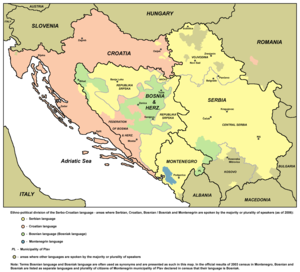 Bosnian (Bosanski [bɔ̌sanskiː], Cyrillic: босански) is a name commonly used for Serbo-Croatian as spoken by Bosniaks; as a standardized form of the Shtokavian dialect, it is one of three Serbo-Croatian standards used officially in Bosnia and Herzegovina. The same subdialect of Shtokavian is also the basis of standard Croatian, Serbian, and Montenegrin, so all are mutually intelligible. Up until the dissolution of former SFR Yugoslavia, they were treated as a unitary Serbo-Croatian language, and that term is still used to refer to the common base (vocabulary, grammar and syntax) of what are today officially four national standards. The Bosnian standard uses the Latin alphabet, though the Cyrillic alphabet is also accepted, chiefly to accommodate previous usage in the former SFR Yugoslavia, but is seldom used in practice.

The name of the language is a subject of some controversy in Bosnia and Herzegovina, Croatia, and Serbia and is sometimes alternatively referred to as Bosniak (also spelled “Bosniac”; bošnjački), reflecting a position that it is the standard language of Bosniaks, not all Bosnians (i.e. Croats, Serbs and Bosniaks).

In addition to Bosnian Translation Services, we can also provide translation services from and to many other languages, such as English, German, French, Chinese Simplified, Chinese Traditional, Korean, Thai, Hindi, Italian, Russian and many others.

Welcome to read more about our Bosnian Translation Services or Get a free quote right now!