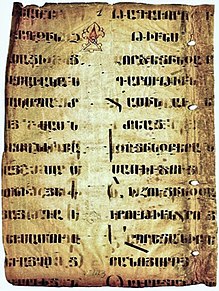 The Armenian language (հայերէն in TAO or հայերեն in RAO, Armenian pronunciation: [hɑjɛˈɾɛn]—hayeren) is an Indo-European language spoken by the Armenian people. It is the official language of the Republic of Armenia as well as in the region of Nagorno-Karabakh. The language is also widely spoken by Armenian communities in the Armenian diaspora. It has its own script, the Armenian alphabet, and is of interest to linguists for its distinctive phonological developments within Indo-European.

Linguists classify Armenian as an independent branch of the Indo-European language family. Armenian shares a number of major innovations with Greek, and some linguists group these two languages together with Phrygian and the Indo-Iranian family into a higher-level subgroup of Indo-European which is defined by such shared innovations as the augment. More recently, others have proposed a Balkan grouping including Greek, Armenian, Phrygian and Albanian.

Armenian has a long literary history, with a fifth-century Bible translation as its oldest surviving text. Its vocabulary has been heavily influenced by Western Middle Iranian languages, particularly Parthian, and to a lesser extent by Greek, Latin, Old French, Persian, Armenian, Turkish, and other languages throughout its history.

There are two standardized modern literary forms, Eastern Armenian and Western Armenian, with which most contemporary dialects are mutually intelligible. The divergent and almost extinct Lomavren language is a Romani-influenced dialect with an Armenian grammar and a largely Romani-derived vocabulary, including Romani numbers.

In addition to Armenian Translation Services, we can also provide translation services from and to many other languages, such as English, German, French, Chinese Simplified, Chinese Traditional, Korean, Thai, Hindi, Italian, Russian and many others.

Read more about our Armenian Translation Services or Get a free quote right now!