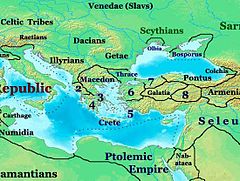 Albanian (Gjuha shqipe, pronounced [ˈɟuha ˈʃcipɛ], or shqip [ʃcip]) is an Indo-European language spoken by approximately 7.6 million people, primarily in Albania and Kosovo but also in other areas of the Balkans in which there is an Albanian population, including western Macedonia, southern Montenegro, southern Serbia and northwestern Greece. Albanian is also spoken by native enclaves in southern Greece and in southern Italy and Sicily. Additionally, speakers of Albanian can be found elsewhere throughout the latter two countries resulting from a modern diaspora, originating from the Balkans, that also includes Scandinavia, Switzerland, Germany, United Kingdom, Turkey, Australia, New Zealand, Netherlands, Singapore, Brazil, Canada and the United States.

Standard Albanian is a revised form of the Tosk dialect.

The history of Standard Albanian is intrinsically connected to the dictionaries of the Albanian language that have been drafted over time, since the draft of a dictionary has at its basis the choice over script of words and their orthography. In 1904 in Athens, Greece, a very important work of Kostandin Kristoforidhi, Lexikon tis Alvanikis glossis (Albanian: Fjalori i Gjuhës Shqipe or English: Dictionary of the Albanian Language), was published.

The dictionary was in Greek script and was followed in 1908 by another dictionary, called Fjalori i Bashkimit written this time in Latin letters (English: The Bashkimi Dictionary). Another important dictionary was that of 1941 from N. Gazulli.

After World War II the Institute of Albanian Language and Literature of the Academy of Sciences of Albania dedicated considerable importance to the unification of the two dialects (Gheg and Tosk) into a standardized version of the Albanian language through endeavors in lexicography and orthographical ruling.

The publication of two important dictionaries, both in 1954, an Albanian language dictionary and a Russian-Albanian dictionary, projected the need of a project on orthography rules in the Albanian language.These rules were eventually published in 1967.

In 1973 the publication in Tirana and Pristina of a book of orthographical rules, Drejtshkrimi i gjuhës shqipe, (English: Orthography of the Albanian Language) created a considerable degree of phonological normalization as well as spelling reform. The book was followed by a widely distributed authoritative dictionary in 1976 Fjalori drejtshkrimor i gjuhës shqipe(English: Orthographic Dictionary of the Albanian Language).

In 1980 the linguists’ lexicographical work toward a standardized Albanian language was culminated by the publication of the Dictionary of Today’s Albanian language (Albanian: Fjalori i sotëm i gjuhës shqipe).

In addition to Albanian Translation Services, we can also provide translation services from and to many other languages, such as English, German, French, Chinese Simplified, Chinese Traditional, Korean, Thai, Hindi, Italian, Russian and many others.

Read more about our Albanian Translation Services or Get a free quote right now!