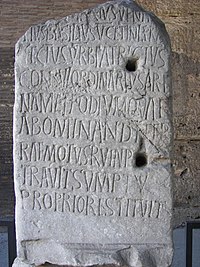 Latin (lingua latīna, IPA: [laˈtiːna]) is an Italic language originally spoken in Latium and Ancient Rome. It and Ancient Greek derive from the Ancient Proto-Indo-European language. Although it is often considered a dead language, a small number of scholars and members of the Christian clergy can speak it fluently, and it continues to be taught in schools and universities. Latin has been, and currently is, used in the process of new word production in modern languages from many different families, including English. Latin and its daughter Romance languages are the only surviving branch of the Italic language family. Other branches, known as Italic languages, are attested in documents surviving from early Italy, but were assimilated during the Roman Republic. The one possible exception is Venetic, the language of the people who settled Venetia, who in Roman times spoke their language in parallel with Latin.[citation needed]

The extensive use of elements from vernacular speech by the earliest authors and inscriptions of the Roman Republic make it clear that the original, unwritten language of the Roman Monarchy was a colloquial form only partly reconstructable called Vulgar Latin.

By the late Roman Republic literate persons mainly at Rome had created a standard form from the spoken language of the educated and empowered now called Classical Latin, then called simply Latin or Latinity.

The term Vulgar Latin came to mean the various dialects of the citizenry. With the Roman conquest, Latin spread to countries around the Mediterranean, and the vernacular dialects spoken in these areas developed into the Romance languages, including Aragonese, Catalan, Corsican, French, Galician, Italian, Portuguese, Romanian, Romansh, Sardinian, and Spanish.

Classical Latin, however, continued to develop after the fall of the Roman Empire and through the Middle Ages, and was used as the language of international communication, scholarship and science until the 18th century, when it was supplanted by vernacular languages.

One of the seven cases is the locative case, generally only used with place nouns. The vocative is nearly identical to the nominative. There are only five fully productive cases; accordingly, different authors list five, six or seven as the number of cases.

Adjectives and adverbs are compared, and adjectives are inflected for case, gender, and number. Although Latin has demonstrative pronouns indicating varying degree of closeness, it lacks articles.

In addition to Latin Translation Services, we can also provide translation services from and to many other languages, such as English, Spanish, French, Chinese Simplified, Chinese Traditional, Korean, Japanese, Thai, Hindi, Italian, Russian and many others.

Welcome to read more about our Latin Translation Services or Get a free quote right now!